Home > Gear > The Hammond Side

You may have noticed already, but if you haven’t, i’m a bit of a ‘gear junkie’..  Or, at least when it comes to the instruments and gear that I play, i’m rather particular..   In the organ instrument category, of course, my first choice is a classic Hammond B3 with either a Leslie 122 or 147.  There’s nothing like the old classic tone wheel instruments out there, especially the ones that have been rebuilt and / or modified to run like new and show no sign of  being 50 years old.  There are a few guys I would recommend if your in the market to get your old Hammond updated.   If your located on the east coast I highly recommend John Haburay from The Hammond Store.  You can reach him at facebook.com/thehammondstore   John is a guy that knows everything you want to know about the Hammond.  He makes his own chop cases and custom chops as well as repairs and restores.  If your looking to order parts for both the older classic models and the newer digital organs, you should look towards B

B Organ, as they are fast and very helpful and friendly..

My early days on the instrument started back in Toledo, Oh.   The first organ I had was actually acquired on a trade with a Korg Poly 800.

I’m not really sure what it even was at this point, but I believe it may have been a Hammond BV or even a B3000 that was custom chopped and certainly not in the best of shape.  I had only fussed around with that unit for a short period of time before I realized that I didn’t know how to get it up and running properly.  I have no idea what even happened to that thing..

Still trying to gain knowledge of the instrument, my next purchase was actually from legend organ man originally out of Pittsburgh PA, Bill Heid.   He sold me his original Korg BX-3, which at that time was probably the best of the portable organs.  To this day, it still has an unique sound, and as long as, like all clone organs, you use it with a real leslie, it’s not a bad thing.  It’s not really an organ to consider these

considered but for a jazz organist wasn’t really all that great of an improvement over the original BX3.  The newer BX3 was built very solid however I had to get rid of it mainly because it weighed to much to take it in and out of clubs every night..

The next clone organ to come along that got my attention was by a company in Sweden called Nord.   Nord released the C1 in 2007.  It was not only a much better clone organ than the BX3 but it was only about 33lbs.  It was light enough to carry on your shoulder in a gig bag with a shoulder strap and small enough to carry with a

flight case on an airplane.  The leslie simulation, though I never used it due to the fact that I would always carry a real leslie, was greatly improved from all prior clones.  Percussion settings were not bad and the Vibrato..  well the Vibrato..   Since the release of the C1, Nord has updated it with the C2 and now the C2D which includes four sets of draw bars and a very hefty price tag!

My current choice for a portable clone organ is the Hammond SK2.  I moved from the Nord C1 to the SK2 after playing around with it a little at the 2010 Frankfurt Music Messe show.  The SK2, like the C1, is also fairly portable and light.  Weighing in around the 35lb mark, the SK2 actually fits into the exact same gig and flight case that my C1 fit into.  It offers all the standard features that you would expect from a Hammond Clone as well as an on-board synth that allows you to use a manual on the organ to trigger the patches from the synth..    You can play the synth patches by themselves or combine them with the drawbar settings. 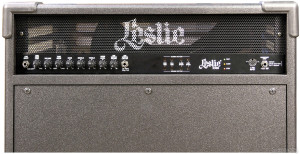 On the Leslie side of my portable rig is a Leslie 3300.  The 3300 is a great new leslie.  It comes with a 300 Watt solid-state amp which also includes a Vacuum tube preamp which is adjustable.  The 3300 includes a 3 band EQ as well as adjustments for the horn volume as well as a volume control for Tube Level, and the sub bass line out.  You can also turn the tube completely off in desired.  It includes a standard 11 and 8 pin connector as well at 1/4″ line output jacks.   The 11 pin allows direct connecting to any organ with a 11pin leslie output like a Hammond B3P or even the new Nord C2D.  A couple other very nice features on the 3300 include a 1/4″ line output jack to drive a powered sub-woofer if your in need of some extra strong bass re-enforcement.   I also use my SK2 with my classic Leslie 147 via a Trek C-1A Combo Pre-Amp Pedal.

As far as the on board digital leslie effects..   I don’t use them and I certainly don’t like them.   The only way it maybe ok, is if your running a clone organ in true stereo and use the digital leslie very sparely!   It would never work for me in a jazz organ setting..

My favorite instrument though, besides my classic B3, is my Hammond B3P.  Though also a digital organ like the Sk2, it possesses a quality that is not captured in the SK2 or any of the other clone organ’s.  The B3P has a system called Direct Analog Keying where every position of each drawbar is sampled, all of the original B3 style multi contacts are included giving it a ‘real’ key click, along with 96 Digital Tone Wheels.  This in itself, give the instrument a much more authentic feel and better sound than any of the portable clones.   I have done very close comparisons between my B3P and my classic B3.  Yes, there is a different, but there is also a difference between the different B3’s that I have owned and played 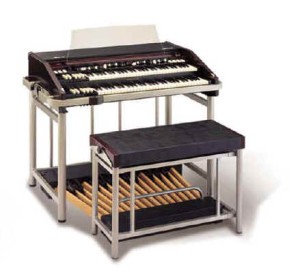 over the years.  Each one has a slightly different sound to them if you want to be vary particular.  You can set the preamp’s all the same on several different B3’s and they will still sound different even if your using the same Leslie cabinet.   The B3P is no different.  As a matter of fact, I can line my

classic B3 up against the B3P and dial in the B3P to almost match the sound of the classic B3.  It will be very close, but I even have more control over the B3P because I can use the overdrive, the different sampled tone wheels (Btype 1, Btype2, or Mellow), reverb, and EQ to get basically any type of B3 sound that your looking for..   The B3P, though marketed by Hammond as there “Portable” Organ is still quite a large piece of gear to move around..  it’s not exactly portable like the SK2, and this is why I own both..

For more info on the Hammond B3P check out this video.  To buy that big ‘soombitch’..   Goto the Hammond Dealers page.